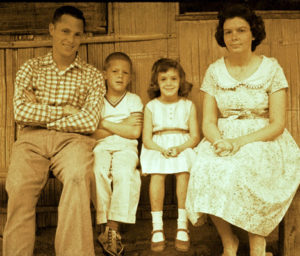 Dick and Jane Farstad in Ecuador with Mark and Martie

On January 8, 1956 five missionaries in Equador, including Jim Elliot and Ed McCully, were attacked and speared by a group of Aucu warriors. The news of their deaths was broadcast around the world, and Life magazine covered the event with a photo essay. The deaths of the men galvanized the missionary effort in the United States and specifically, the calling of Dick and Jane Farstad to risk their lives to tell others about Jesus Christ. Just four years later, they arrived in Quito with their young children, Mark and Martie, for Spanish language study then on to Arajuno on edge of Amazon to live with the same jungle Quechuas that killed Jim Elliot and Ed McCully a few years before.

Why would Dick and Jane move from the relative safety of America to risk their lives and family in the Amazon? Faith in Jesus Christ. Faith that takes a long-term perspective because in the short-term nothing tangible is realized except our faithfulness.