by Larry Murray | Identity in Christ 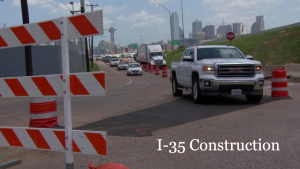 Construction on Interstate 35 in Texas began 60 years ago in 1959. During the Cold War, it was the vision of President and former General Dwight D. Eisenhour to have the infrastructure, an interstate highway system that might be necessary for mass movement if war came to U.S. soil. In Texas, I-35 spans over 500 miles from Laredo on the Mexican Border to Gainesville. It was operational ten years later, in 1969, but various sections of the road have been under construction for repairs and expansions ever since then. Many of us have been on there, stuck in traffic, forced to make detours, or make a pit stop at Bucces. It seems I-35 will never be completely finished.

Our lives are similar. We’re constantly under construction. We live in the era between Christ’s ascension to Heaven & the coming of the Holy Spirit on the day of Pentecost and the second coming of Jesus for us, His church. It’s an era described by theologians as “already, but not yet.” There is a tension between who we already are through our identity in Christ, and what we see ourselves to be in our daily experience. We’re under construction.