In Luke 2:14 the angels proclaimed to the shepherds in the fields of Bethlehem, “Glory to God in the highest heaven, and peace on earth to people he favors!” Often, as we look around the world, we wonder where is this Christmas peace on Earth? 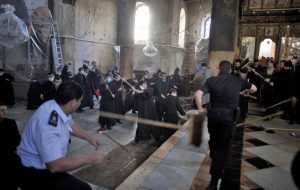 In the city of Bethlehem a few years ago, a fight broke out in the Church of the Nativity built over the traditional site of the birth of Jesus. The conflict was between two groups of Christians – the Armenians and the Greek Orthodox battling in Bethlehem. Hundreds of clergymen fought with brooms as they traded accusations about one side encroaching on the other’s domain within the church premises. This squabble over sacred space was over who should clean which area of the ancient church, a privilege parallel to ownership of the area. Hence, the weapons of warfare – brooms! Thankfully, no one was seriously injured, and nothing was physically damaged. But, what about the reputation of Jesus, born the Prince of Peace? What does it say to the world when they see Christians plagued by a lack of peace with one another? What does it communicate about the life of Jesus when there is no peace on earth among His followers? Where is the Christmas peace on Earth? Where is the peace in our own hearts?

Peace isn’t the absence of conflict, it’s the presence of Christ. Peace isn’t based on the external circumstances of our world, but the internal transformation of our hearts. There is peace on earth and glory to God because of the birth of a baby – a Savior born for you, who is Christ, the Lord.